The PARC tax is up for renewal in American Fork. It is an additional 0.1% sales tax voters first approved in 2014. So, if you spend $100, you will pay 10 cents. There are some questions around the sales tax that I hope to answer here along with sharing my own personal experience being on the board of one of the organizations which received grants from PARC funds.

What is the PARC Tax? How does it work?

The process starts by applying for a grant. Applications are then reviewed by the PARC Advisory Board of Directors, and a recommendation is made to the city council. The city council can then adjust and vote on an allocation resolution, as it did on April 27, 2021. (Later, the city council approved adding the Timpanogos Chorale to the list of grant recipients.) The city council then is responsible to hold the groups accountable to use the money as they outlined. New applications are submitted each year.

How is it spent?

About 60% is going to the parks and recreation. About 40% is going to arts and cultural events. There is some information available on the website, but it appears to be out of date. It includes up to 2020 but not 2021.

Brian Thompson, chair of the PARC Board, said that grant money was used for capital expenses, such as musical instruments, in the past, but going forward that won’t be allowed. Only operational expenses will be covered. He also said the Board is encouraging groups to become more self-reliant and less dependent on tax dollars. It is worth noting that there is no compensation for being on the board.

A significant portion of the PARC funds given to arts organizations is used to pay salaries. PARC funds allocated to the parks do not pay salaries. The city either uses outside contractors or provides its own labor for those projects.

There have been some major efforts to improve Art Dye through projects such as improving the restrooms, paving the parking lots, and adding pickleball courts. Other parks have also been improved. A more thorough list can be found on the PARC website.

About $350,000 a year has been going to pay off a bond that was taken to buy the land between the baseball field and the rest of Art Dye. Mayor Frost said that if the renewal fails, impact fees will be used for this.

Based on the PARC website, about 40% has gone to arts. About 75% of that has gone to the Timpanogos Arts Foundation, TAF. TAF is an umbrella group that contains smaller groups. The group is headed by Executive Director Reggie Walker.  Although it is difficult to get accurate numbers regarding the group, some were available from 2019 and 2021.

In 2019 they were awarded $335,000 in PARC funds.  Three performing groups subsequently left TAF, the grant for 2021 is $296,622. Below are charts showing fund distribution for those two years along with the revenue sources. Anything not labeled TAF in expenses is from the subgroups. 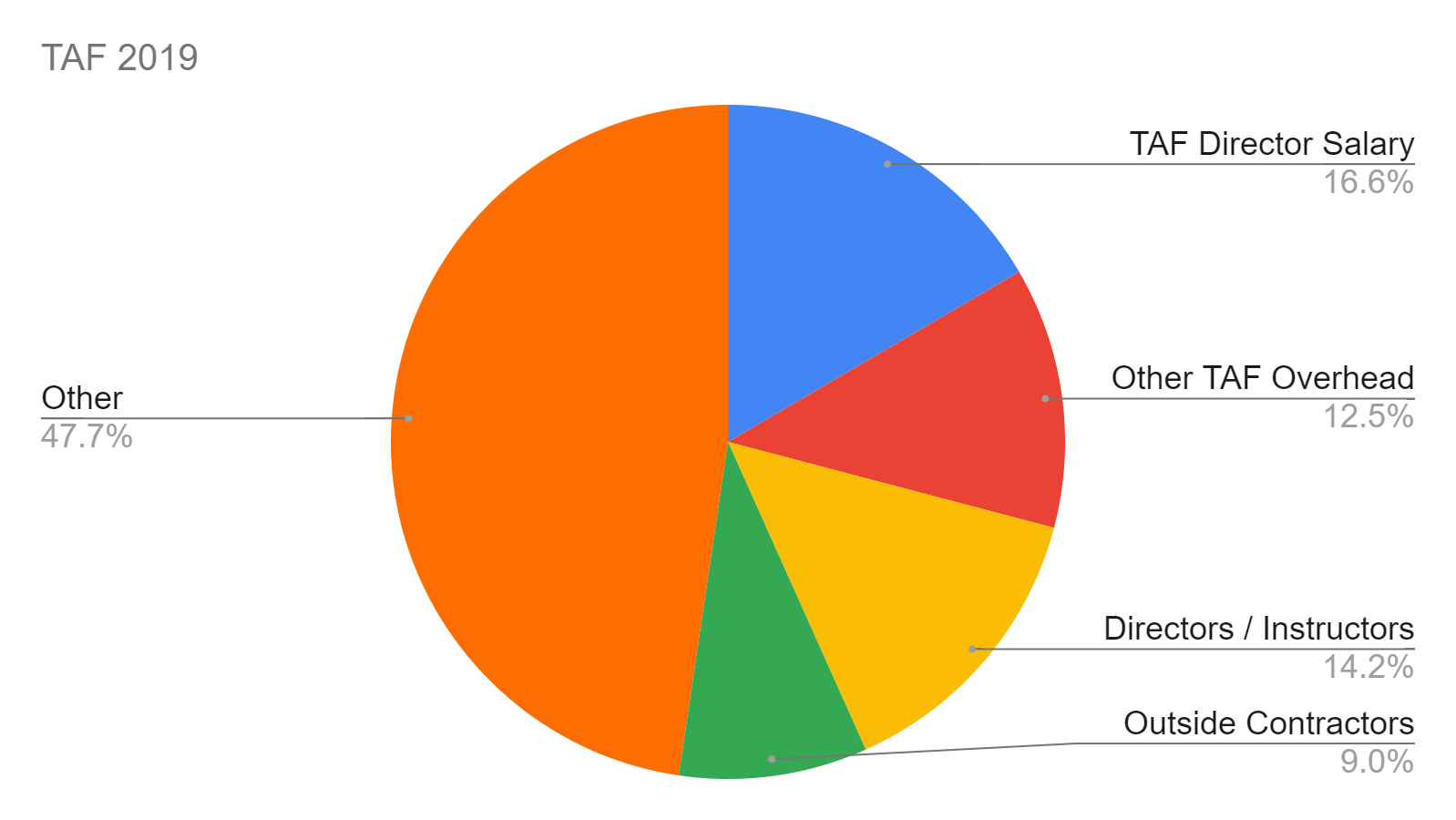 According to the approved budget based on a $335,000 grant from PARC, $149,140 was budgeted for overhead, including $85,000 for salaries, almost all going to Mr. Walker. The vast majority of the money for the organization was budgeted to come from the PARC tax. Attendance numbers are not available, and it seems the focus is on how many people participate in the programs. Those numbers aren’t available either.

Groups aren’t required to show how many people attend their events. But you can compare another organization which receives PARC grants, the Harrington Center for the Arts. According to Summerisa Stevens, a member of the Harrington Board of Directors, the PARC portion only makes up 17-23% of their revenue. They hold big events like Fork Fest and the Concerts in the Park series. They have had over 16,000 people participate this season.

There are some major issues around access to information. First, go and look at the PARC tax website. It claims that $6.4 million has been distributed but if you add up the amounts, you only get $4.8 million. That is because the 2021 data isn’t on there. The website was only updated at the author’s request to include minutes to meetings, along with agendas. It also took weeks for the author to receive the information on a few of the groups that were awarded for 2021. The author was told he could file a GRAMA request and wait to get more information.

In 2019 several people, including city leaders and Advisory Board members, suggested an audit, which was subsequently performed. When asked, Mr. Thompson wasn’t sure of its scope or result. The author tried to do a GRAMA request to see more details but was told that because they are private organizations, their financial information is not publicly available through GRAMA.

A question was asked during the recent mayoral debate about the lack of transparency. Tim Holley stated that we need to see more specifics of how the money is spent and Mayor Frost said he was unaware of transparency issues but took ownership of that problem.

It is worth noting that other nonprofits, such as the Utah Symphony, make salaries available through their website.

There are both positives and negatives regarding PARC. It is important to keep in mind that when something is up for a vote, those promoting it are on their best behavior. While the first few years of a new program may have issues, hopefully those issues are being resolved.

Residents generally appreciate the park improvements. Groups like the Harrington attract a lot of visitors and are straightforward about how the money is spent. On the other hand, groups like TAF are not transparent, and would not respond to several requests to be interviewed for this article. John Miller of the Wasatch Music Alliance referred me to talk to Mr. Thompson of the PARC board instead.

While there are some programs and major improvements to our parks, the limited data the author has been able to see shows some persistent problems. There is a major lack of information available. Are groups like TAF becoming less reliant on the PARC tax? It is hard to say. They do have a smaller portion of their income coming from the PARC tax but part of that is more complicated. They lease the Valentine Theater from the state and then sublease it to child organizations and other; this counts as revenue and makes the percent that PARC provides seem less. Even with that, the percent is still down somewhat. Is it enough?

I was the Vice-chair of the Board of Directors of the Wasatch Winds, which was part of TAF. I asked for access to finances but after 2 years I didn’t have any. I asked the director of TAF, and he told me we should know how much we had and everything was lumped together in one bank account. I raised my concerns to a member of the city council after hearing similar concerns from somebody in the Wasatch Show Band. I am no longer associated with either organization.